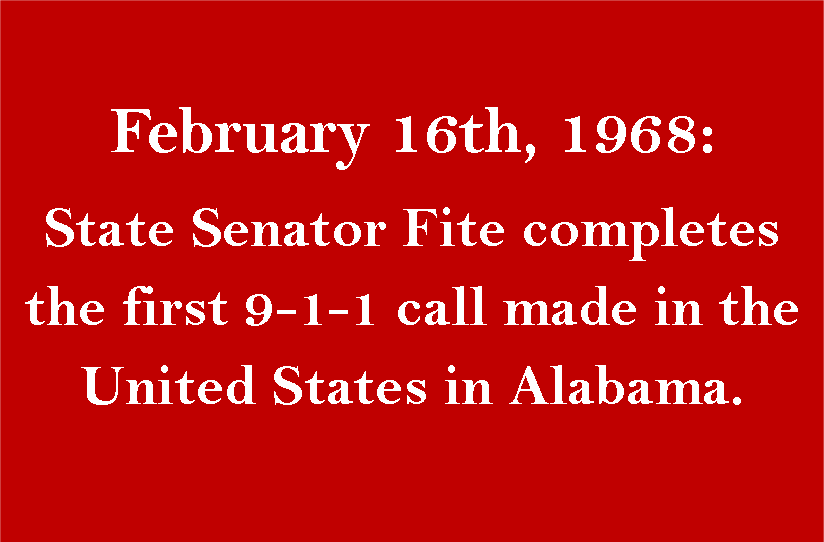 Still running on a system dating from 1968, 9-1-1 has managed over 2 billion calls since inception – this year, let’s get dispatchers every tool possible to manage the next 2 billion.

“Yeah, I know. Can I have a large with half pepperoni, half mushroom and peppers?”

“Yeah, do you know how long it will be?”

“Ok, Ma’am, is everything ok over there? do you have an emergency?”

“..And you can’t talk about it because there’s someone in the room with you?”

“Yes, that’s correct. Do you know how long it will be?”

“I have an officer about a mile from your location. Are there any weapons in your house?”

“Can you stay on the phone with me?”

“Nope. See you soon, thanks”

This amazing account of an actual 9-1-1 call posted by “Crux1836″ on a 9-1-1 dispatcher Reddit forum, reminds us all of the extraordinary work that 9-1-1 dispatchers perform.

48 years ago today, on February 16, 1968, Alabama state legislator Rankin Fite made the first ever 9-1-1 call in the United States. The call was made from the Haleyville, Alabama City Hall to the local police station.

Since that time, the heroic dispatchers of the 9-1-1 community have managed over 2 billion emergency calls for help. With the proliferation of mobile technology, the job has become only more challenging. Last year, 180 million 9-1-1 calls were made from mobile devices. Despite all of the capabilities of modern phones, those calls go through the same public switched phone network that Mr. Fite first used 48 years ago to make his call.

Without detailed location information, any data about a caller’s identity, medical condition and sometimes even the caller’s name, 9-1-1 dispatchers work tirelessly to manage millions of emergencies annually. The pizza delivery example was made famous by this 2015 Super Bowl commercial, but is just one call out of over 180 million mobile calls managed annually with little more than the caller’s voice. For example, William Kalaher, a dispatcher who had been on the job for just two weeks when he talked a couple through the birth of their child over the phone, or Joann Hilman-Payne, a NYC dispatcher who spent 8 hours on the phone with a woman who had suffered a stroke, while rescuers tried to find her.

These stories remind us of the amazing work that dispatchers do, despite the technology limitations of an infrastructure dating to the 1960s. Imagine if the domestic assault victim who called 9-1-1 for help and pretended to order a pizza could have texted her real situation to 9-1-1? Or if Ms. Hilman-Payne knew the location of her caller (instead of staying on the line for eight hours as police tried to locate her).

Since Mr. Fite’s call 48 years ago, technology has dramatically changed our lives. Today, we stream live video, translate information on the fly, text our friends and family, plot a route to where we are going, measure how many steps we take each day, and yes—even watch cat videos on demand—all while out and about, living our lives. It’s time we harness this same technology for when we need it most.

FCC Chairman Tom Wheeler has repeatedly noted that “The 911 System Isn’t Ready for the iPhone Era.” Under his leadership and in collaboration with the major industry organizations, the 9-1-1 community is slowly moving away from the telephone system, toward an internet-based system called Next Generation 9-1-1 (NG9-1-1). Unfortunately, absent congressional funding, adoption rates have been slow (10+ years after its conception, only 5 states have fully adopted NG9-1-1).

Fortunately, much of the 9-1-1 community (including over 1,000 dispatchers) has looked at solutions that can be implemented today, that that do not require any funding. Three years ago, I founded a tech start-up with engineers and entrepreneurs from MIT, Harvard, and Stanford called RapidSOS. We began working closely with dispatchers to think about how data could be pushed through the existing phone system.

The result is a technology that connects anyone with their nearest dispatch center, transmitting a variety of additional data, including the caller’s precise location, contact information, and even medical and demographic data.

Birthdays are about celebrating the past and looking forward to the future. This year, we celebrate the over two billion lives that have been touched by 9-1-1 dispatchers. Let’s give them every piece of technology possible for the next 2 billion calls.