by Hfbtech | All, Public Safety 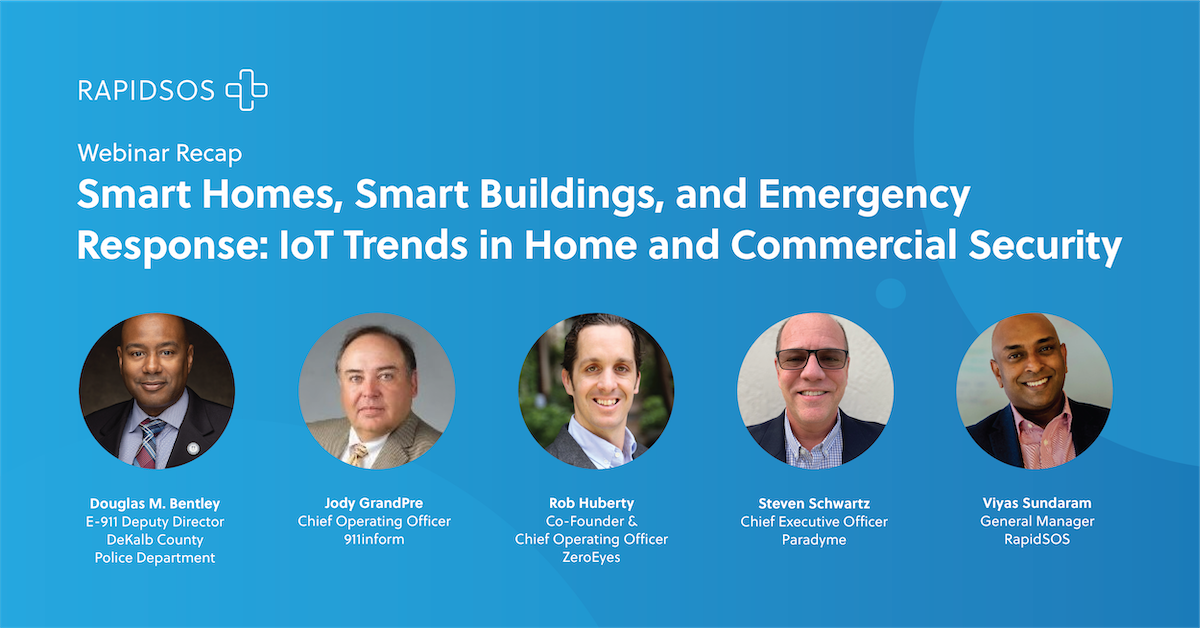 On Thursday, August 6th, RapidSOS General Manager Viyas Sundaram hosted a webinar on the latest advancements in connected building technology and their impact on public safety. We spoke to experts in the connected building, commercial security, and threat detection industries, as well as Major Douglas Bentley of the Dekalb County Police Department.

Download the webinar to see the full conversation: you won’t want to miss this one.

Jody GrandPre, COO of 911inform, Rob Huberty, COO of ZeroEyes, and Steven Schwartz, CEO of Paradyme Security, lent their decades of expertise to a conversation on how each connected building component helps create stronger, safer communities.

Check out our recap of the conversation, and be sure to get the full recording for yourself.

Smart building technology is innately linked to public safety: it protects people during emergencies like structure fires, medical emergencies, active shooters, natural disasters, and more. They help building administrators and homeowners prepare for and react to these emergencies faster, and moreover help first responders get where they need to efficiently and effectively.

When an emergency occurs, whether it’s a threat to an occupant or to a community, smart building technology provides everyone in the chain of command robust situational awareness so they can make data-driven decisions to protect lives and property.

Companies like ZeroEyes, 911inform, and Paradyme are leading the way to help public safety officials operationalize this data. Facilitating a relationship between first responders and connected buildings is critical to achieving their core function: to keep us safe.

According to Rob Hubert, COO of ZeroEyes, “…you can have a lot of technologies, but if you don’t get it in the right people’s hands, it becomes superfluous. In order to protect people, first responders need to be able to use it to understand it. How you operationalize this data is critical.”

A core component of smart buildings is security technology. That ranges from building controls and access cards to security cameras and threat detection platforms. All of these components make a building safer, but they can come at a price: higher security often results in inconveniences to the occupants. In the case of schools, for example, that can mean inadvertently making an environment more hostile for the sake of security.

As Steven Schwartz describes it, “by its very nature security isn’t convenient. There’s always a push and pull based on how much money an organization has available and the safety standards they expect. In a school for example, you want the visibility of security without the inconvenience.”

Smart building technology, especially when connected directly to first responders, can provide the eyes and ears for commercial buildings with minimal intrusion. ZeroEyes’ AI threat detection platform, for example, overlays on existing CCTV networks to immediately identify weapons. 911inform creates a geofence around a property, like an office building or a college campus, that notifies administrators and first responders whenever a 911 call is placed.

All of these platforms offer layers of protection without the intrusive and sometimes oppressive appearance of security. Rather than relying on metal detectors, armed guards, and dogs, smart building technology can make public safety more seamless and less intrusive.

Partnering with first responders to save lives

The COVID-19 pandemic has fundamentally changed the nature of emergency response. 911 centers have had to deal with record-high call volumes despite staffing shortages caused by the virus. As the economy continues to suffer, tax and city revenues are declining – directly affecting the ability of public safety agencies to hire, staff, and effectively perform their jobs.

Having access to life-saving data from connected building technology, however, can help first responders gain efficiency while short staffed. As Major Doug Bentley describes it, “technologies like this are extremely vital because this is the expectation from our community. Having some of these technologies in our center is a force multiplier – we become more efficient and we can do more with less.”