RapidSOS to Deliver MedicAlert User Information to 999 Systems During Emergencies 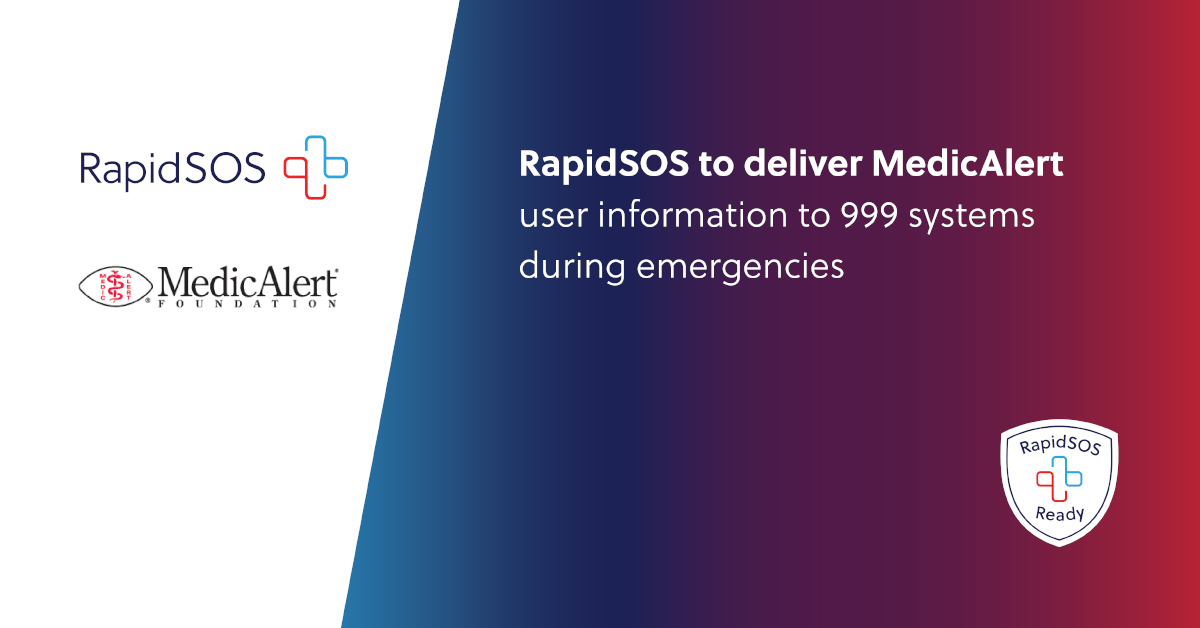 RapidSOS to deliver real-time information to 999 system on users of MedicAlert’s ID cards, bracelets and necklaces as emergency services head to treat them

A potentially life-saving partnership between a global public safety technology company and a leading UK medical ID charity will instantly send potentially critical information on any of its members’ medical conditions directly to the NHS’s 999 system – while offering their exact location in an emergency.

Beginning in November, RapidSOS is to provide its service to MedicAlert allowing the integration of more than 43,000 medically-vulnerable people into the country’s emergency response call handling system. This will give police, fire service, ambulance and coast guard crews immediate notifications of any pre-existing conditions, allergies and medication regimes as they make their way to treat people on emergency call-outs.

The partnership – which comes at no cost to the NHS – marks New York-based RapidSOS’s first entry into Europe. In America, RapidSOS’s technology protects over 90% of the US population and its direct data link from connected devices supports more than 250 million calls to first responders each year. Previously, this information could only be obtained via the MedicAlert dedicated emergency line once emergency personnel were on-scene. In many emergency situations, seconds can make all the difference. Those heading to the scene of a collapse or accident will now be forewarned.

The vital medical profile held by MedicAlert for each person is linked with the 999 dispatch system. Any time an emergency call is made from a MedicAlert user’s mobile phone, full details of their conditions and medications will automatically be relayed to first responders.

In any situation where a MedicAlert user has been incapacitated and the call comes from someone else’s phone, 999 call handlers will also be able to gain fast access from their own systems via the MedicAlert ID bracelet number.

Kirsten Giles, CEO of MedicAlert, which was founded in UK in 1964, said: “This partnership with RapidSOS uses the best emergency technology available to bring added peace-of-mind to tens of thousands of our members who are medically-vulnerable in some way, whether it is due to a pre-existing condition, a hidden disability, an allergy or because of their prescribed medication. Our members’ conditions may include diabetes, autism, epilepsy or heart and lung-related issues.”

“Giving the emergency services immediate access to crucial and detailed information, in many cases will save lives. By providing relevant information for individuals with dementia, or other cognitive conditions, this partnership will also support our police forces to care for those who may require additional assistance.”

Michael Martin, CEO at RapidSOS, explained the company will work with 999 directly as well as via public safety software vendors to allow its technology to recognise callers automatically via the CAD (Computer Aided Despatch) in Control Rooms.

Martin added: “If a call is made from a MedicAlert user’s phone, our platform will check this in the charity’s database in real-time, flag that up to the 999 call handler, and display the relevant medical information on their screen. Emergency crews will also have access to this on their way to scenes of emergencies via their onboard computers.

“This is our first partnership in Europe and it is extremely gratifying to us to be sharing the vital medical profiles held by MedicAlert at no charge to the UK’s National Health Service in order to help change medical outcomes for the better.”

Over the coming months, RapidSOS will be exploring further ways in which its emergency technology can be integrated with other UK companies in sectors such as automotive, security, healthcare, insurance, apps and wearables so that their users and members can benefit.

MedicAlert employs Registered Nurses who verify all members’ medical details when they sign up and whenever a change is made, whilst there is a six-monthly update alert for members to ensure their information remains accurate. All users of MedicAlert already give consent to have their details shared with the NHS and the information remains stored in the charity’s database and is not held by RapidSOS.