3 Times that the RapidSOS and what3words Integration Helped Save Lives

what3words revolutionized the idea of location precision and became a life-saving solution with its concept of assigning an easy to remember, three-word address to every 10ft square in the world. Users can now take advantage of this accurate addressing system when they need help but don’t know exactly where they are.

what3words is a geocoding system, but it’s powered by so much more than a street address, and so much easier to remember and relay than coordinates. what3words has divided the entire globe into 57 trillion 10 foot squares, and given each one a unique combination of three random words that identify a precise location.

No more trying to find an exact street address or wonder which building entrance to search near. what3words gives such a precise location that first responders can go directly to the designated 10 foot square, with complete confidence they will find the caller there.

First responders can find callers fast with an accurate location

When callers struggle to find ways to describe their location, what3words can help them say exactly where they are with just three words, speeding first responders on their way. Even if a caller doesn’t have the what3words app on their smartphone, the what3words address can still be communicated to 9-1-1 telecommunicators via the RapidSOS Platform. 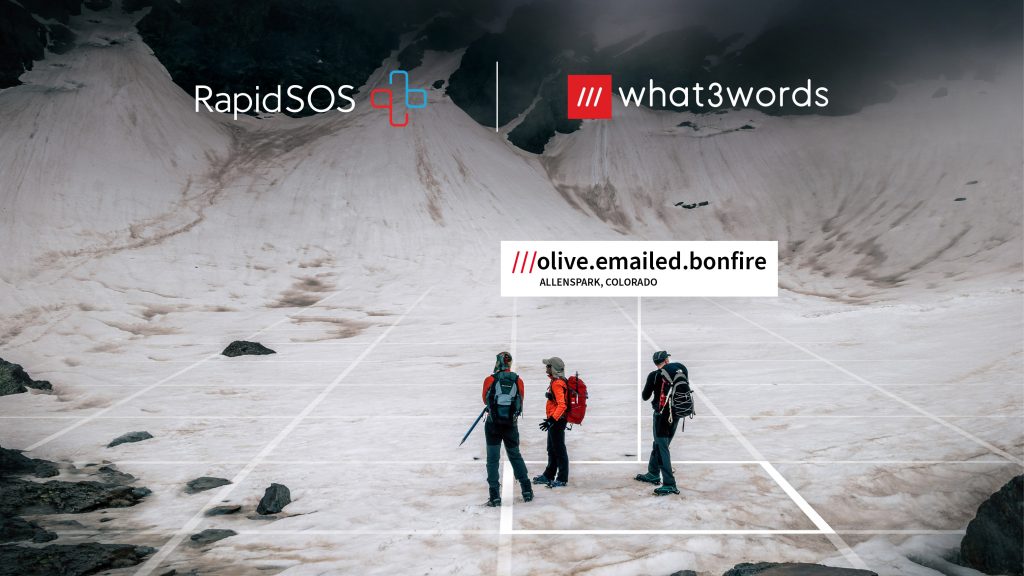 How what3words works with RapidSOS

When a caller dials 9-1-1, the telecommunicator will be able to see the what3words address of the individual’s current location displayed directly on their screens on the RapidSOS Portal, and can then pass the address to field responders.

First responders in the field and other stakeholders can also leverage the what3words address. Unlike pins in a digital map or complicated geographical coordinates, what3words addresses make an accurate location simple to communicate. They can be readily shared between teams and agencies and across different platforms.

Here are some examples of RapidSOS and what3words helping to assist first responders and save lives:

The Allegheny County Emergency Services center received a call for a physical rescue from a local park in the northern portion of Allegheny County, with the caller reporting a patient located approximately a quarter mile from the trail. RapidSOS provided the what3words address, which was then entered into the CAD sheet. The EMS dispatcher relayed the what3words location to EMS personnel, who entered it into the mobile app and used the navigate function to take them directly to the patient. The EMS supervisor said without the precise location, it could have taken significantly longer to locate the patient. 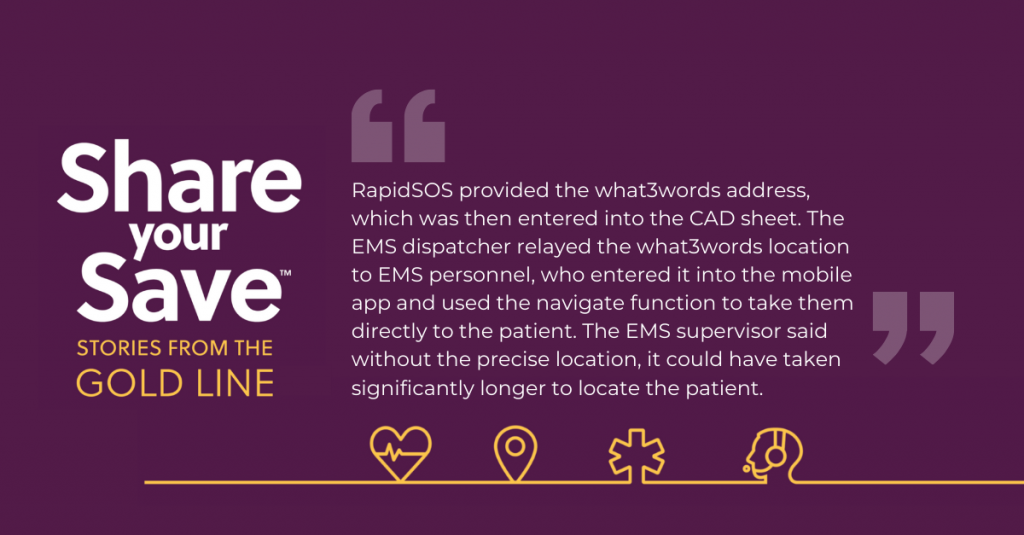 Two different telecommunicators at Baldwin County 911 in Alabama coordinated efforts to help locate and rescue an elderly man who had become lost in the woods. One was able to use what3words to ascertain the man’s accurate location and share information with responders in the field, while another working in the area passed her own coordinates through RapidSOS to officers en route with a search dog. These tools helped responders quickly find the missing man and reunite him with his family.

It’s not always matters of life and death in which what3wordscan be useful. 911 Dispatch Ithaca was using the RapidSOS Portal with what3words to track an open line 911 call. The bread crumb feature showed an odd pattern tracking off roads. Watching the path update revealed a pattern which, when paired with a notice from a public utility, revealed that the call was actually an accidental “pocket dial” from a helicopter pilot surveying high voltage lines. Even though no life needed saving that day, the story made the rounds as an example of how companies such as RapidSOS and what3words are developing tools to deliver effective and efficient emergency response.

Are you a public safety software company interested in integrating with RapidSOS to make life-saving connections? Become a partner today.